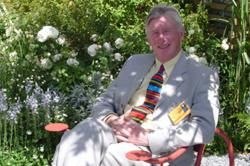 David Stevens FSGD, FCI Hort is one of the best known garden designers in the world. He originally trained as a landscape architect and went on to form his own private practice in 1972. He was offered and accepted the first Chair of Garden Design at Middlesex University.

David’s 26 RHS Chelsea Flower Show medals, 11 of which have been gold, and three Best Garden in Show awards have ensured his success. He has additionally won three Gold Medals at The Hampton Court International Flower Show as well as awards in South Africa, Australia and Best Garden in Show Awards at Shizuoka and Hamamatsu in Japan. He has just won yet another Gold Award at BBC Gardeners' World Live.

David has been a gardening consultant to B and Q Retail, Wyevale, Homes and Gardens Magazine and was also chosen as the designer to create a public memorial to Princess Diana at the Royal National Rose Society gardens in Hertfordshire.

David has contributed articles to virtually every gardening publication including The Sunday Times, The Daily Telegraph and The Sunday Telegraph. He is the author of 21 books on landscape and garden design selling many million copies.

He pioneered garden design on television with the acclaimed six part series Gardens by Design, this being followed by an equally popular series Gardenwise both for the BBC. He has worked as a TV guest presenter for numerous garden shows including BBC coverage of the Chelsea and Hampton Court Flower Shows, Gardeners' World, Grassroots, and the long running TVS series ‘That’s Gardening’. He runs a thriving practice and continues to broadcast around the world and teaches both in the UK and the superb Filoli Gardens in California.