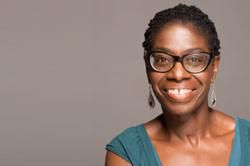 Flo shared expert advice on the VegTrug Grow your Own Stage and on the Potting Shed Stage.

In 2012 Flo exchanged the office environment for a working life outdoors. In her own words it has been one of the best decisions of my adult life.

Flo was born, raised and educated in south London. Flo left school and took the unexciting path of secretarial studies while still pursuing her love of languages. She worked for a couple of years as a bi-lingual secretary and then tempted in the private sector. After a few years working in the charity sector Flo decided to go to university to challenge herself and increase future opportunities. A love of African music and culture led to a BA in African Studies at the London School of Oriental and African Studies. At the same time she was dancing and performing semi-professionally in various dance groups, singing in community choirs, and writing songs and singing in bands with friends.

Flo spent 13 years working for a national charity which was a pivotal experience for herself. She worked across different teams, was involved in the grant making processes, created and managed education resources for schools, gained an appreciation of media, fundraising and marketing sensibilities, and also represented the charity while going into schools and also when travelling overseas to visit funded organisations.

Flo describes the shift from the office to the garden as being like a rebirth. She recently completed a Diploma in Garden design and has been working as a gardener with private clients since July 2012.

Flo loves the hands-on aspect of gardening. "I like nothing better than the creative process of being handed a blank canvass of a garden and entrusted to create something magical and ‘on brief’ for the client. Whether it’s planting, digging, mixing cement, laying natural stone paving, or fencing, I love the physicality of gardening as much as the creative play of designing a new space" - Flo Headlam.

Flo has been hugely impressed by the New Perennial Wave of planting and is keen to incorporate many of those elements in her new planting schemes. She's also a huge fan of evergreens – without them there’s no structure. And Flo loves structure too!