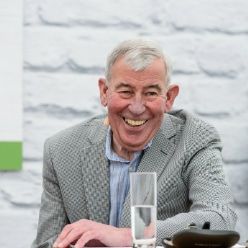 Jim is one of the UK’s leading gardening experts. He was superintendent of the Royal Parks for 25 years and his clients have included Her Majesty the Queen and his old friend the Queen Mother.

Jim's love of gardening began when, having been excluded from class, the naughty youngster was set to work in his school's walled garden.

This judge thrives in an outdoor environment; there's nothing Jim doesn’t know about planting and growing. His dedication has seen him judging competitions all over the world and sharing his knowledge with the public is his greatest passion.
At any one time only 63 people in the world hold the Victoria Medal of Honour – the highest accolade in horticulture. Jim is one of them. He was also head judge for ‘Britain in Bloom’ for 25 years, where he was nicknamed ‘Judge Dread’.