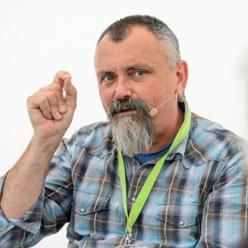 David Hurrion has spent more than 20 years writing for and editing the nation’s crop of garden magazines, and is now Associate Editor for BBC Gardeners’ World Magazine. He has also appeared both as a regular contributor and an horticultural commentator on a wide range of national and local radio programmes, as well as on television.

David's knowledge is based on more than 40 years of growing plants, working in gardens and nurseries, and gardening his own plots in many different parts of the UK. He studied horticulture at Writtle College in Essex and went on to gain his certificate in education which took him to teach at some of the country's foremost horticultural colleges. He has also travelled to every continent with the exception of antarctica to discover plants and gardens, both independently and, on more than 40 trips accompanying groups of gardeners. Click here for his website.