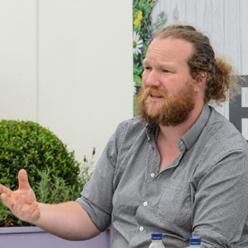 Saul Walker fell in love with horticulture through his Grandparents passion for visiting historic houses and gardens, and after a brief spell as an Archaeologist, he went to train and work as a Gardener for the National Trust at Antony House in Cornwall. After many years there he was accepted to study on the prestigious 3-year Kew Diploma of Botanical Horticulture at RBG, Kew and was exposed to the fantastic plant collections in the gardens and glasshouses, as well as travelling to Australia, Southern Spain and the French Riviera to study plants in their native habitats. Following his time at Kew I spent a couple of years as part of the Show management teams for both the RHS Hampton Court Palace and RHS Chelsea Flower Show respectively, however he was unable to resist the call back to his native Devon, where he is now the Head Gardener of Stonelands House- a privately owned 10 acre garden. Saul speciality interests include Woodland Gardens and Orchids (especially Australian ones). He regularly give talks on various horticultural subjects, am a British Orchid Council Judge and has a keen interest in Garden Photography.